Venus Alpha Capital
Home Stock Markets Simplified DoomsDay Scenarios -Nifty
Share This
Facebook
WhatsApp
Linkedin
Email
ReddIt
Well today, we looked at the monthly charts of Nifty 50 – to get a long term picture.
The big picture looks scary .
As per  the Elliot theory, we have completed Wave 1 (after Triple Top) and now we are in Wave 2.
Wave 2 happens to be deep (unless we’re starting a new bull run but that is not the case here)….we have already done 23% (1st Fib level) and are now heading to 38% ,near 14473.

Other aspect we looked at historical NIFTY PE chart.

In the past, during the severe falls, Nifty has taken support in between PE of 10-15.
If we take 15, the fall should be contained near 12000, but what if Nifty happens to take support at PE of 10, then only God can save us.

Can FII support  the market in coming months?
Well, does not look like.
Every country’s currency was depreciating whereas  the same for many countries were holding (including Indian currency) But FIIs were expecting that we can’t stand against this global tide so they were selling beforehand (smart move)
And now INR has broken out – in a beautiful Stage 2 breakout ( as per this model’s projection , it is headed towards anywhere between 85-95).
So FII would wait  for this  currency move to play out completely before bringing the fresh  money is – two obviuos benefits for them
a) They get more rupees for less dollar so their amount goes up by just sitting oversead and waiting
b) As currency depreciates, market tumbles and they get everything cheaper.

Stage Analysis is a technique that helps an individual investor to enter and exit his/hers long term holdings.

It is based on the moving average of 30 Weeks. 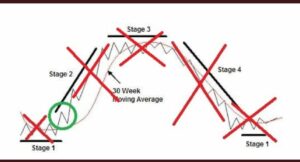 As per this analysis , the situation of NASDAQ , DOW and Nifty 50 does not look good. Maximum % of stocks are in Stage 4 (declining phase) . For example ,Nifty 50 has more than 70% stocks in Stage 4.

In all 3 Indexes,one can see that maximum  % of stocks are in Stage 4- a clear sign of a bear market. 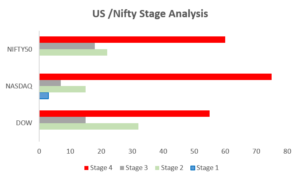 Macro View -US -Mother of All Markets.

From EW prespective it is in Wave 2. Expect a bounce in coming weeks and then a deeper plunge.

US Inflation -The Joker in the Pack

Us Inflation is moving higher – highest in the decades.

US Fed is trying hard to control inflation by raising interest rates – thus sucking liquidity from all capital markets. The risk is recession in US but it seems Fed has accepted that reality – now fight is between mild-recession or severe recession.

Also US FED wants to saves its Bond market in lieu of its issues with Russia and China – and wants people to buy its bonds ( by creating fear around equity). And it seems to be succeding.

As of now it seems that FED is not reversing its stated policy.

Till the time it does not reverse, very less hope for global equity markets- the butterfly effect

In the past whenever US markets fell, US FED came to help as some of the public is invested in stocks so it wanted to save them.

But look at the inflation chart and the following chart …in the past when FED came to help by decreasing interest rates by doing QE  ,in those years inflation was not an issue.

Now with these rates hikes by FED, US inflation is yet to come under control but  all emerging markets are falling . 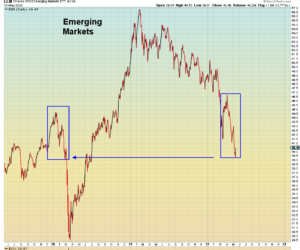 a) Currencies of EMs are depreciating, FIIs fear that they would fall more due dollar strength so they are selling out in all emerging markets.

b) Various foriegn nations and companies have dollar denominated debt, with falling currencies their debt level as well as interest payouts are going up mthus affecting the whole valuations models

c) To fight currency depreciationtion as well as to fight infla, Central Banks (including ours, RBI) of almost all the countries are increasing interest rates. Increased interest rates means lower demand and higher interest cost for the companies – so impact on revenue as well as earnings.

The vicious cycle is on.

Summary – it is a bit depressing picture. Hopefully we would do better than this and there won’t be any doomsdays.

If the worst comes, how It would play out?

No market moves  in a straight line .

Here are the 2 of the several likely paths to the downside.

Disclaimer: This is one sided view of the markets. Market may behave very differently than discussed above. Use your own discretion to make your investment decisions. Take every opinioon with pinch of salt.