Who is Pavlov and what he has to do with yours or mine behavior in the markets?

Ivan Pavlov was a Soviet  physiologist known primarily for his work in classical conditioning.  won the Nobel Prize for Physiology  in 1904,[ becoming the first Russian Nobel laureate.

Pavlov is known for his dog experiments. This played a critical role in the discovery of one of  the most important concepts in psychology: Classical conditioning.

In his digestive research, Pavlov and his assistants would introduce a variety of edible and non-edible items and measure the saliva production in dogs that these items produced.

Before serving the food , they always rang the bell and research-assitants in white coats would go and serve the food.

Salivation, he noted, is a reflexive process. It occurs automatically in response to a specific stimulus and is not under conscious control.

However, Pavlov noted that the dogs would often begin salivating in the absence of food and smell.

The dogs would start salivating as soon as they heard the sound of the bell or the research assistants went to their rooms  – with or without food.

He quickly realized that this salivary response was not due to an automatic, physiological process.

Based on his observations, Pavlov suggested that the salivation was a learned response.

Pavlov’s dog subjects were responding to the sight of the research assistants’ white lab coats, which the animals had come to associate with the presentation of food.

Relationship with humans in Markets:

We can see similar effect in humans during bull and bear markets.

Trend & macro-factors is food in this case and green and red candles are like research –assistants in white coats.

If someone has seen a prolonged bull market, a rise after every dip, they get conditioned to buy on every green candle (research assistants in white coats) ignoring the macro factors and don’t try to understand whether there is a real cause or a real trend behind it (the food).

In US (mother of all markets) , investors have been buying the dip hoping the Fed will soon capitulate.This is what they learn in last many years of bull-market .

Behavior has been one of the most dangerous aspects of this bubble. For over a decade investors have been conditioned to buy the dip. This is 100% Pavlovian behavior. The regime is changing. And it is changing at warp speed.

What Is the Recency Bias?

In behavioral economics, the recency bias  is the tendency for people to act on the basis of recent information or events without considering the objective probabilities of those events over the long run.

There are numerous implications for recency bias for investors. 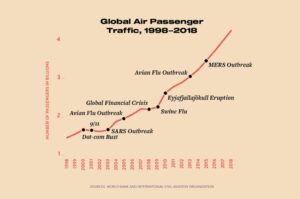 Decrease in air-passengers traffic  after the 9/11 event is another example of regency bias .

People got scared of flying as civil airplanes were used by terrorists to blow-up the building.

When we make decisions we tend to be swayed by what we remember. What we remember is influenced by many things including beliefs, expectations, emotions, and feelings as well as things like frequency of exposure

This tendency is irrational, as it obscures the true or objective probabilities of events occurring, leading people to make poor decisions.

This bias matters a lot for the financial markets, as memory of recent market -behaviours or events can lead investors to irrationally believe that a similar event is more likely to occur again than its objective probability.

As a result, investors may make decisions to buy into bubbles or  sell into bear markets,  since  recent crashes and bubbles can be salient in the minds of individuals as they are occurring.

For example, recent breed of invesors believe that Fed would  bailout the markets like it has been doing for last 14 years.

They don’t understand that the bailout cycle is ending due to higher inflation.

Now situation seems to be very different. Inflation is all time high in USA and FED can’t print the money to support the markets rather it has reduce the liquidity by raising the interest rates.

Understand the following two charts – what were the inflation levels when Fed was bailing out and where is inflation today. 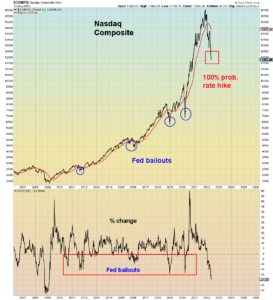 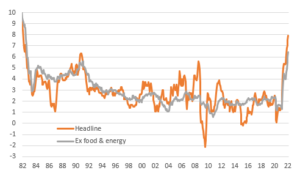 Understand it asap , come-out of the recency bias ,lest  you’re not left holding the bag.

Don’t fall into the trap of Pavlovian behaviour due to your recency bias.

If you wanna read about our current market views, you can click here.